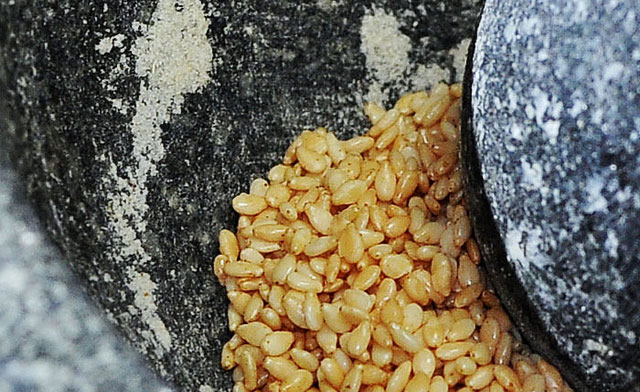 My journey of discovering sesame oil started long time ago, when I was exploring Asiatic tastes of Chinese kitchen. Then I was fascinated again by it, when I went to an Ayurvedic yoga massage. The masseuse used for the massage a mix of cold-pressed sesame oil and calamus powder from the indian herb Acorus Calamus. This mix is very good for the entire body and spirit, but especially for detoxifying, stimulating the blood circulation and for relaxing the muscles. However, the sesame oil provides a smooth and moisturized skin. After the massage I felt really good and relaxed.

Benefits of sesame oil are known for thousands of years. It is mentioned in the Indian Vedas and used as well in the Indian Ayurvedic medicine as an oil with many healing properties. In Asia the sesame oil is an essential ingredient for cooking.

– sesame is rich in calcium

–  it has a high percentage of omega-6 polyunsaturated fatty acids. It is unique because stable at room temperature, thanks to its two naturally occurring preservatives: sesamol and sesamin.)

– there are many studies about sesame oil that show improvements of many chronic diseases (high blood pressure,high cholesterol, diabetes, migraines…)

– as many cold-pressed oils, even sesame oil is a potent antioxidant with high levels of vitamin E , acting on a cellular level. It provides essential nourishment to the cells and it acts as a cell growth regulator

– it is naturally antibacterial, antiviral and it is a natural anti inflammatory agent

– applied on skin, it calms the burns. It also nourishes the skin, especially when exposed to hard weather conditions

– it kills bacteria and help to regenerate scalp problems, even when there are dandruff problems

– when applied to the skin, it helps your skin regaining softness and nourishment

In cosmetics you can use the sesame oil as a basic oil for massage. Try it even on damp skin after the shower or mix it with some organic sugar to get a gentle body scrub. Your skin will be soft and nourished. It can be applied on face skin, too. Sesame oil is especially recommended for protecting the tender baby skin or treating the young problematic skin. As many teenagers wrongly think that oils are not appropriate for their skin, this is not the case for cold-pressed oils. Especially the sesame seed oil helps to control spot eruptions and neutralizes the toxins, developed on the surface of the skin and in the pores, because of its antimicrobial properties.

For concluding, there are many legends that narrate stories about sesame seed. There is an Assyrian legend which says that when the gods met to create the earth, they drank the wine made from sesame seeds. According to Hindu legends and beliefs, sesame seed is the symbol of immortality and the sesame oil is considered one of the best oils. It is used even in celebrations, offerings, rituals and prayers.