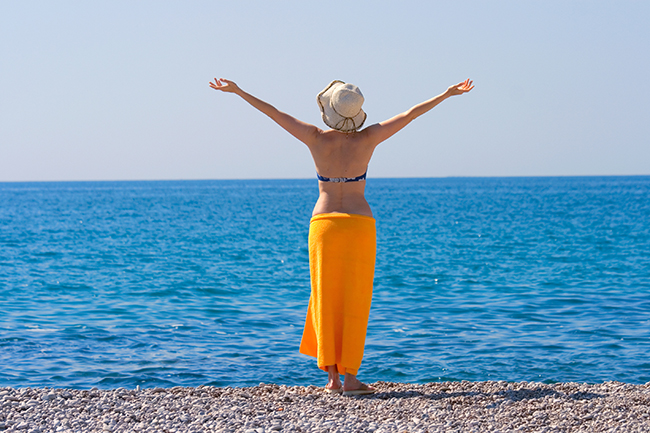 I couldn’t help myself to write my thoughts concerning the every year’s biggest summer issue – the sun and sun creams. When the first hot sunny days start, populist medias are full of generic articles about sun creams and skin cancer, which want to convince us that the sun is our huge enemy. Stop and think for a moment. Do you really believe that the sun is our big enemy? I belong to the type of people who love going out to enjoy and recharge themselves on a nice sunny day. I’ve never felt (and still don’t) the sun is harmful, for I’ve always enjoyed it. So I wanted to unveil what does stand behind this regular bombardment with fear, skin cancer, forcing with highest SPF creams,…

Let’s start at the beginning. Since ancient times the man worshiped the nature and the sun as a source of life. He knew that the sun is the source of all living existence. Nowadays, the industrialization has torn apart man from nature, from the source. We still think that is normal working entire days under artificial light, eating artificially grown food which haven’t seen the sun and real soil, but chemicals. We apply cosmetics and eat medicines with toxic chemicals poisoning our bodies and much more. Do you really think this is normal? You can still open yourself to hear the other part of this story.

Nowadays, many scientific sources already know that without sun = natural light, there is no real life. The sun is the main source of vitamin D, which is essential for our health and strong immune system. Read further, what Dr. Michael Holick, who opposes to the chemical and cosmetic industry, states in his book: The vitamin D solution.

“Vitamin D is not a vitamin but a hormone. It is unique in that it is made in the skin as a result of exposure to sunlight. Photosynthesis of vitamin D has been occurring on earth for more than 750 million years. Some of the earliest life forms that were exposed to sunlight for their energy requirement were also photosynthesizing vitamin D. Both children and adults have in the past depended on adequate sun exposure to satisfy their vitamin D requirement. It is well documented that at the turn of the last century upwards of 80% of children in the industrialized, polluted cities of northern Europe and northeastern United States suffered from the devastating consequences of vitamin D deficiency rickets. The skin has a large capacity to make vitamin D. Exposure of a person in a bathing suit to a minimal erythemal dose of sunlight, which is typically no more than 15-20 minutes on Cape Cod in June or July at noon time, is the equivalent to taking 20,000 IU of vitamin D orally. It is now well documented that in the absence of any sun exposure 1,000 IU of vitamin D3 a day is necessary to maintain healthy levels of 25-hydroxyvitamin D in the circulation.”

In addition, have you ever asked yourself, why our grandparents, 40 years ago, while working entire days outside on the sun, without a sun cream, haven’t had any problems with skin cancers? The answer is simple. Since the sun is the source of life, it has also provided our skin a great self-protecting mechanism, in order not to get sunburns. This mechanism is the nice brown tan, that should be accomplished GRADUALLY. When we expose to the sun gradually, our skin becomes firmer, absorbs and produces a lot of vitamin D. Step by step, it give us a brown color, which is the self-protective barrier that prevents us to obtain burns.

Unfortunately, man has changed the direction of living and put us in closed buildings where we cannot see the light, except artificial one. And here comes the main problem about sun exposing. The industry has invented chemical cocktails that act on your skin as “protection”, so that you can quickly go out from your office, directly exposing yourself to high temperatures in ultra hot vacation destinations. People don’t go out on the sun step by step, but directly exposing their body to a high amount of sun radiation. This is not normal, especially for pale skin, non-adapted to the sun. Applying a sun cream, full of harmful substances, that acts on our body with preventing the skin to get the tan, it’s not a happy news. Have you ever asked yourself what does a cream like this contain and how does affect and block your body functions, so that the sun cannot do its natural process? Don’t you think there is a more logical connection between skin cancer and chemical sunscreens?

“Incidence rates of melanoma have risen especially steeply since the mid-1970s. The two principal strategies for reduction of risk of melanoma and other skin cancers during this period were sun avoidance and use of chemical sunscreens. Rising trends in the incidence of and mortality from melanoma have continued since the 1970s and 1980s, when sunscreens with high sun protection factors became widely used. Indeed, the Garland brothers strongly believe that the increased use of chemical sunscreens is the primary cause of the skin cancer epidemic. Recent studies by them have shown a higher rate of melanoma among men who regularly use sunscreens and a higher rate of basal cell carcinoma among women using sunscreens. This was confirmed by another study group who found that ‘always users’ of sunscreens had 3.7 times as many malignant melanomas as those ‘never using’.”

This makes sense to me! I want to point out another fact concerning skin cancer:

“British doctors R Marks and D Whiteman are unconvinced of the sunlight/melanoma link. They point out that:
– Melanoma can be found on ovaries
– Melanoma occurs less frequently on sun-exposed areas
– In Japan forty percent of pedal melanomas are on the soles of the feet
– There is 5-times more melanoma in Scotland on the feet than on the hands
– And melanoma in Orkney and Shetland is ten times that of the Mediterranean islands.
Other clinicians agree. Karnauchow says: “The simplistic idea of a sun/melanoma relationship is based more on a belief than science.”. . . “As with other neoplasms, the cause of melanoma remains an enigma and most probably the sun has little, if anything, to do with it.”

To conclude, there is no doubt that too much sun exposure causes severe skin sunburns, stress and skin aging, that can lead to skin cancer. Even though, there are many obvious evidences and proofs regarding conventional sun creams that are even more carcinogenic than the sun. I will explain the difference between safe organic sun creams and the regular sun creams, full of harmful ingredients in my next post.

What is the solution?

The solution is always a midway between, a middle path, that means:

– DON’T EXAGGERATE, even with sun exposure. It’s obvious that the sun radiance in peak hours (from 11 -16) is very strong and may cause severe burns! It’s not natural to be exposed on the sun in this time of the day. Even mediterranean nations, who are adapted more to sun, know there is siesta time (relax) during that time of the day. This is why we have to avoid the sun. If you will expose on sun, when it is not so strong, there is no need to worry. Use a natural organic sunscreen without harmful chemicals and apply it several times during the day. It’s better to protect your skin several times with a lower SPF than force the skin with high number of SPF such as 40 or 60. It’s just against the body nature. The higher the SPF, more toxic chemicals contains. This is the reason why organic sun creams does not have so high factors. And the reason why dermatologists claim that high SPF is good, is because they have to sell the pharmaceutical products.

– In hot summer days, when the sun radiation is high, drink a lot of pure water, so that your body will be hydrated.

– Even if you are in the shadow during the peak time (11-16h), dress with light clothes and cover the body, cause the sun rays can burn you everywhere. Imagine how Tuareg people from Sahara desert wear their clothes, long layers of natural fabric, that protect them from the sun.